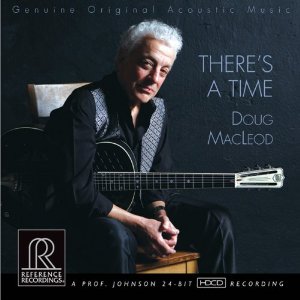 Doug MacLeod, the perennial Blues Music Award Nominee, is a singer-songwriter in the American tradition. He is a traveling artist that writes and sings original songs that are based on his own life and experiences.

He learned from the old masters, lived the music, survived the life and carries forward a valuable tradition. MacLeod is known for his superb songwriting, guitar wizardry, warm soulful vocals, wit and unforgettable live performances.

At the heart of this is his knack for storytelling, bringing characters-from the faceless to the legendary-to strikingly real life. As a youth he overcame abuse and a crippling stutter by turning to music. After he picked up a guitar, and tried to sing – he found his voice. While he developed his rich, soulful singing style MacLeod also worked out a unique, unorthodox and powerfully rhythmic acoustic guitar style.

The rage of his turbulent youth was eventually channeled through his guitar, using his relentless right hand to pound out an insistent, churning beat to complement his intricate bottleneck and finger-style technique. Over 29 years, 19 studio albums, several live records, compilations, a blues guitar instructional DVD and a live performance DVD, MacLeod has consistently earned raves. His songs have been covered by many artists including Albert King, Albert Collins, Joe Louis Walker and Eva Cassidy. He has co-written songs with Dave Alvin and Coco Montoya. MacLeod’s songs have been featured in many TV movies and the hit show In the Heat of the Night. Two of his songs are on Grammy nominated albums by Albert King and Albert Collins.

MacLeod signed with Reference Recordings in 2012. His new album “There’s A Time” will be released in March of 2013. In every note he performs and records, MacLeod subscribes to the rule-of-thumb learned from country bluesman Ernest Banks from Toano VA. who instilled in him to “Never play a note you don’t believe”, and “Never write or sing about what you don’t know about.”

Listen to a sampler of the new CD by [CLICKING HERE].