Ruf Records announces the signing of guitarist/singer Devon Allman and a February 12, 2013, release date for his debut solo album, Turquoise. 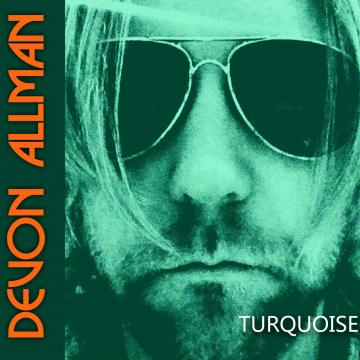 Devon Allman is currently on tour in Europe as a member of Royal Southern Brotherhood, the band he formed along with Cyril Neville (percussion and vocals), Mike Zito (guitar and vocals), Charlie Wooton (bass) and Yonrico Scott (drums). The group’s debut self-titled album was released in May and has been in the Top 15 on the Billboard blues chart for six months, also generating extensive radio airplay and rave critical reviews from the press.

Turquoise is loaded with very personal, honest and powerful tunes in its 11-track song list. In “Turn Off the World,” one of Devon’s most insightful compositions on the new CD, he asks to go where he can “wash off this rock and roll” so that he can cleanse his soul to start anew and refresh his mind after spending so much time on the road. “Homesick,” carries that sentiment further and was the first song written for Turquoise.

“The last 10 years I’ve spent in hotels, airplanes, taxis, truck stops, etc.,” says Allman about the track “This song is dedicated to my family for putting up with my absence.” He demonstrates his affinity for Latin and African music on the rhythmic “There’s No Time” (co-written by rising star guitarist Tyler Stokes); weaves an insightful autobiographical tale on “When I Left Home” (with guest Luther Dickinson adding some slinky lead and slide guitar); and pares down to the quietest of places on the lovely “Yadira’s Lullaby” (which recalls his late uncle Duane’s acoustic guitar on the classic “Little Martha”). Turquoise represents some of the finest work in Devon Allman’s career thus far, engaging in its scope and thrilling in its execution. This is an album of reflection of Devon’s past life and it’s the stories that only he can tell.

“These songs are very special to me,” says Allman. “It’s part ‘dusty road driving music’ and part ‘tropical getaway’ music. These are the stories, feelings and reflections from my last couple of decades of forging my musical path.”

Devon’s Biography: Currently based in St. Louis, Devon Allman was born in Corpus Christi, Texas, where he grew up surrounded by a humble life along with his mother. His first love affair with music came at a young age, eventually becoming a spiritual calling that wouldn’t stop. It wasn’t long before he and his guitar joined bands, and in 1999 Devon formed his Southern rock jam band, Honeytribe. While his breakthrough into the music industry may have been blunted by his choice not to use his illustrious surname, it served the purpose of his having to avoid the burden of the barrage of questions about his famous father that even he was unsure of how to answer. It was when Honeytribe began to release CDs and tour nationally that interviews slowly began to trickle out that Devon was the son of one of the biggest names in rock music, Gregg Allman. Over the years, Devon has joined his illustrious dad as a special guest during The Allman Brothers Band’s legendary series of shows at the Beacon Theater in New York City. Today, he embraces who he is and where he’s been, knowing that he has paved his own way on Turquoise.