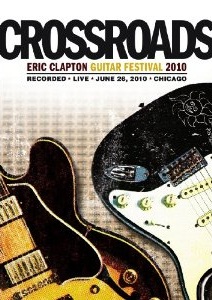 For one day only, Clapton gathered the past, present, and future of guitar music onto one stage for an incredible all-day musical event in front of a crowd of over 27,000.

The third Crossroads Guitar Festival was a sold out, 11-hour tour de force with all profits benefiting The Crossroads Centre in Antigua, a treatment and education facility founded by Clapton for chemically dependent persons.

Rhino Entertainment captured every epic note from that blistering summer day in Chicago and will release over 4 hours in High Definition on “CROSSROADS GUITAR FESTIVAL 2010.” Fans around the world will have a chance to experience many of the festival’s greatest moments including performances by Clapton, ZZ Top, Steve Winwood, B.B. King, Jeff Beck, Vince Gill, Sheryl Crow, Buddy Guy, John Mayer, Bill Murray, and many others as well as behind-the-scenes footage and candid interviews with the performers.

Pre-Order for the DVD is available through Amazon.com. Click below: