SPOILER ALERT: Sample clips on unreleased music below… if you are not into cutting edge blues rock, don’t click to listen!

Regular readers of TheGuitarBuzz.com know that Joe Bonamassa is a favorite around here and his recently announced 13th album, “Driving Towards the Daylight” is the perfect example of why. 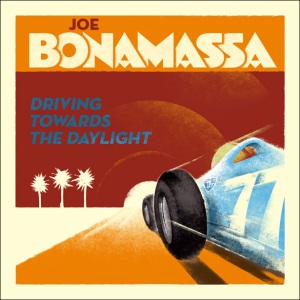 Joe Bonamassa - Driving Towards the Daylight

Producer Keven Shirley first teamed with Joe Bonamassa to release “You and Me” back in 2006 making “Driving Toward the Daylight” their seventh collaboration in as many years.

Their time together has proven to be a marriage made in blues heaven as they continue to push the evolution of blues rock to new and higher levels.

As expected, this CD highlights Bonamassa’s signature style of blues, roots, and rock & roll. There is plenty of old and plenty of new. The old feels new and the new feels newer. It includes four “Bon-originals” and seven cover songs.

Shirley wanted to pull more out of Bonamassa and did so by bringing in a stellar group of session players the likes of Aerosmith’s Brad Whitford and son Harrison Whitford on guitar, Anton Fig on drums, Arlan Schierbaum on keyboards, Michael Rhodes on bass and Jeff Bova and The Bovaland Brass on horns.

The track list is well balanced, starting off with Bonamassa’s own “Dislocated Boy”, a power-filled-rocker that will hopefully make the set lists on Joe’s summer/fall tour. The hard driving beat is a perfect opening track and sets the stage for what lies ahead.

[LISTEN TO A PREVIEW OF “DISLOCATED BOY”]

Next, Joe covers Robert Johnson’s “Stones In My Passway”, and demonstrates yet again that “The Blues Ain’t Dead” by taking a 75-year-old blues roots classic and transforming it to the Zeppelin age. According to Joe, the song was Kevin’s idea – which certainly explains the vibe!

[LISTEN TO A PREVIEW OF “STONES IN MY PASSWAY”]

The title-track follows and illustrates Joe’s talent going well beyond six-strings — to the pen — as Joe releases his creativity on one of his strongest authoring’s yet. The lyrics pull you in and the melody holds you there…

Here is the official “Driving Towards the Daylight” video:

The entire “Driving Towards The Daylight” track is available as a free download here.

“Who’s Been Talkin” is a Howling Wolf cover that’s one of my favorites. Starting with a clip of Wolf’s actual voice, Joe rips into the main riff and turns the listener back once again to the roots. It’s also has that Zepp’ish-like feeling with a melody that just sticks in your gut.

[LISTEN TO A PREVIEW OF “WHO’S BEEN TALKIN”]

The Bluesy trend continues with a cover of Willie Dixon’s “I Got All You Need”, It’s a tune that Joe refers to as a “Greasy Chicago Shuffle”…with a 60’s British flair. Lot’s of fun with this one!

“Joe does Whitesnake” with Bernie Marsden’s “A Place In My Heart” and adds enough emotion to make you believe Gary Moore has come back to record one more song. Close you eyes and get lost in the tribute. I sure did.

[LISTEN TO A PREVIEW OF “A PLACE IN MY HEART”]

The gears shift back to blues-rock with a killer version of Bill Withers “Lonely Town Lonely Street”. About half-way through the song you realize there is only one chord being played…attribute that to Shirley’s magic on the board.

“Heavenly Soul” shows off Bonamassa’s well matured (he just celebrated his 35th birthday) vocals. For a guy that at one time did not want to sing…he’s come a long way.

Next up is Tom Waits’ “New Coat Of Paint” with the massive guitar solo we have come to expect from Joe… and he does not disappoint.

“Somewhere Trouble Don’t Go” is an upbeat and Rockish version of an original Gospel tune with awesome lyrics. Let me say it now…this guy can turn any song into a blues-rock masterpiece!

The surprise closing track is the Australian rock singer Jimmy Barnes classic, “Too Much Ain’t Enough Love” featuring Jimmy Barnes himself on vocals. The blending of Jimmy’s vocals and Joe’s Les Paul chops are seamless.

Recent attendees of Joe’s concerts have heard Joe’s jokes about not having a hit record after 12 albums and 140+ tracks – which is frankly, utter blastpheme.

Most of us have our own definition of what makes a hit record (which differs greatly from the music industry rules). For me, a hit is simply defined as a song I can’t wait to play again. Using that criteria, Joe Bonamassa has a lot of hits…. 11 of them on this record alone.

“Driving Towards the Daylight” will be released on Monday, May 22nd by Provogue Records.

Want to Hang Joe Bonamassa on Your Wall?

Contact Tom Noll directly to inquire about ALL art prints for sale.

I will personally testify that the quality of these art prints will exceed your expectations!