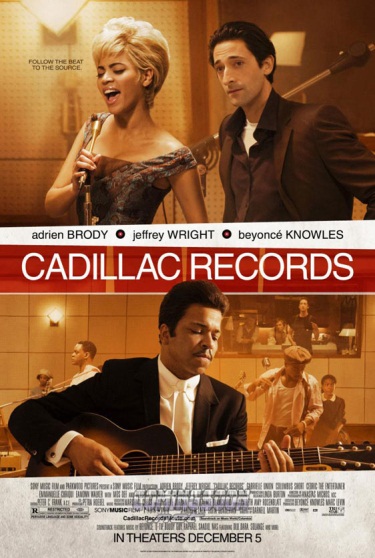 CADILLAC RECORDS (now on DVD) is a riveting ensemble film depicting the rise, in the early-‘50s to late-‘60s, of key musical figures at the crossroads between blues, rhythm & blues, and rock & roll.

Based on the true story of the original Chicago-based purveyors of electric blues, Chess Records, it centers on two men: Leonard Chess (Adrien Brody), a Polish-Jewish nightclub owner; and Muddy Waters (Jeffrey Wright), a transplanted Mississippi sharecropper with sights set on musical stardom.

After hearing Waters’s electrified Delta blues during a tussle at his nightclub, Chess decides to pool his resources into releasing what were then called “race records.” Soon a coterie of label talent, from Little Walter and Howlin’ Wolf, to Chuck Berry and Etta James, help to propel the fledgling label to the top of the charts–with each hit-maker rewarded by Chess with a shiny new Cadillac automobile.

While sometimes playing loose with some minor historical points, the film truly hits the mark with its attention to visual detail, from costumes and cars, down to vintage recording equipment, all of it is a feast for period buffs.

But what truly makes CADILLAC RECORDS captivating are the exceptional musical performances of Beyonce Knowles (Etta James) and Mos Def (Chuck Berry), two of the finest musicians-turned-actors of their time.

My favorite line of the entire movie? “Rock-N-Roll is nothing more than BLUES all sped up” –Muddy Waters.

I found a copy at my local library and watched it for free.  Now I am off to buy a copy on eBay. Yes, it’s that good.