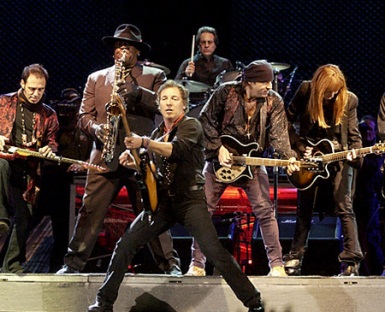 Bruce Springsteen And The E Street Band will release their third official live concert DVD (following 2001’s Live In New York City and 2003’s Live In Barcelona) on June 22, according to a report published today by Backstreets Magazine.

London Calling: Live In Hyde Park was recorded last year at London’s Hard Rock Calling festival during their 2009 Working On A Dream tour. The release will be available in both single-disc Blu-ray and double-disc DVD versions.

From the PRESS RELEASE:

…the 163-minute film documents 26 tracks of live Springsteen that begin in daylight and progress through a gorgeous sunset into night. London Calling: Live In Hyde Park conveys both the experience of being on-stage and the vast crowd experience of the festival environment. Viewers are able to see Springsteen spontaneously directing the E Street Band and shaping the show as it evolves.

The set list spans from Born to Run era to Working on a Dream and includes rare covers such as The Clash’s “London Calling,” Jimmy Cliff’s “Trapped,” The Young Rascals’ “Good Lovin’,” and Eddie Floyd’s “Raise Your Hand.” Springsteen also performs fan favorite “Hard Times (Come Again No More),” written by Stephen Foster in 1854. Brian Fallon from The Gaslight Anthem joins the band as a guest vocalist on Springsteen’s own “No Surrender.”