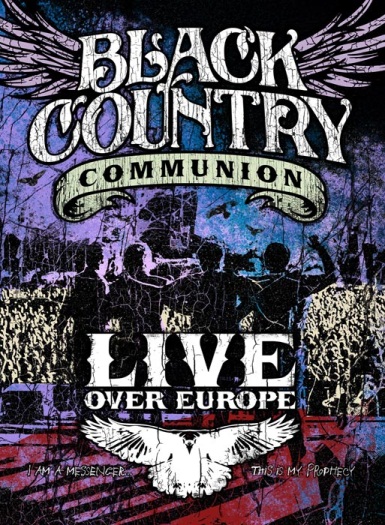 I sent out a tweet last night that said: “Think Joe Bonamassa is just a blues guitarist? Think Rock-n-Roll!”

I must say that listening to “Song of Yesterday” is a like religious experience.

For those who can’t wait, I have embedded the YouTube video that was posted with the live audio overdub. This is not the video from the DVD, but it is the actual audio.

The 2-DVD live set was filmed with 14 HD cameras and 5.1 surround sound during the band’s debut tour in the summer of 2011. Over three nights, playing to packed venues in the German cities of Hamburg, Munich and Berlin, the 18-song set list (17 originals and 1 cover) hits on both of BCC’s albums – 2010’s debut and 2011’s sophomore release 2, whichThe Sunday Mercury praised, “This is classic rock goes large, an album that lives up to its heritage. It may not be bettered this year.” Live Over Europe highlights include the songs “Black Country,” “One Last Soul,” “Save Me,” “Man In The Middle,” “Cold,” and “Song of Yesterday.” Bonus features include an exclusive 28-page collector’s booklet and DVD with a 20-minute “behind the scenes” featurette and photo collection.

“We saw that this live act could be an awesome force of nature to behold; one that promised legendary performances like those of our heroes of Classic Rock. The plan was to get them out there for the entire world to hear. Records allow a certain musical finesse, but live performance promises so much in the very transient nature of a gig; chances are taken, boundaries are crossed and the most exciting performances explode. Two studio albums built a repertoire big enough for a full concert which allowed us to unleash the monster for the rest of the world to see and feel.”
– Producer Kevin Shirley

BCC recently completed their debut tour, visiting a select number of cities in North America and Europe. On June 10, the band played to a near sold-out crowd in Anaheim, CA where The Orange County Register exclaimed, “The four members of BCC truly recast the heavy rock of the ’60s and ’70s and yank it into the 21st century as well as anyone in recent memory.” At the Wolverhampton Civic Hall, The Birmingham Mail called their performance “rip-roaring” and “breath-taking.”