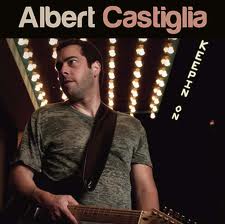 Keepin On features five new original tunes, which display Albert’s continued growth as a songwriter and guitarist, plus his unique take on songs by John Lee Hooker (“I’m Goin’ Upstairs”), Mack Rice (“Cadillac Assembly Line”), T-Bone Walker (“My Baby Is Now on My Mind”), Robert Nighthawk (“Murderin’ Blues”) and Bob Dylan (“Till I Fell in Love with You”).

Albert Castiglia (pronounced “ka-STEEL-ya”), began playing guitar at the age of 12. In 1990, he became a member of The Miami Blues Authority and was later voted “Best Blues Guitarist” by New Times magazine in 1997. Shortly thereafter, he was spotted by legendary blues singer/harmonica player Junior Wells, who asked Castiglia to join his band as a guitarist and singer. With Wells as his mentor, Albert performed at clubs and festivals across America, as well as in Canada and Europe. During that time, he also got the opportunity to play and jam with many other blues stars, including Pinetop Perkins, Ronnie Earl, Billy Boy Arnold, Lurrie Bell, Jerry Portnoy, Eddy Clearwater and Otis Clay. After Junior Wells passed away, Castiglia toured with Atlanta blues singer Sandra Hall.

Castiglia is poised on the edge of a major breakout in the blues world. A soulful vocalist that reminds listeners of Van Morrison, a skilled instrumentalist, and a still-maturing songwriter that has gotten better with each album, Keepin On is the album that may make Albert Castiglia a household name among blues fans.