The newest addition to the Fender Pawnshop range is the Fender Excelsior Amplifier. The concept behind this strangely named range began in 2011 by recreating premature unique designs from the ’60s and ’70s. Perhaps a bit ahead of their time the prototypes failed to make it into production and left the factory and entered pawnshops, which is where the name comes from. One of the results is the Excelsior, a vintage looking amp with retro Fender genes. 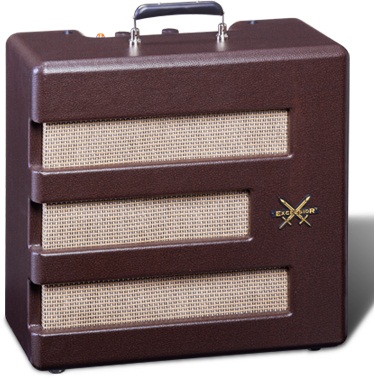 It’s clear to see why the Fender Excelsior was deemed ‘too out there’, visually at least. It takes the word vintage to a new level with a vinyl cover and ‘E’ shaped grille finished with a golden logo. You can almost picture it surrounded by miscellaneous junk in an antique or indeed a pawnshop.

‘Underneath the hood’, or so to speak, we clearly see that Fender have based this on a vintage amp. A practice amp 13-watt design around a 15” custom designed driver. Fender have described the amp as being capable to provide tones from ‘refined’ to ‘raucous’ thanks to the amp being an all-tube design, two 6V6 tubes and two 12AX7 tubes, the more tubes the better (apparently).

The Excelsior has a pretty unique feature unusual to amps; it has a separate microphone, instrument and accordion input. This may not be to everyone’s benefit but could be very useful to blues harmonica players. It also features a tremolo with speed control, treble/bass switch and an external cable output.

In my opinion this is a love it or hate it amplifier. It wasn’t designed to everyone’s taste and I think Fender are targeting, how shall I say this, the experienced guitar player. It really does have an authentic vintage feel to it and just seems to have character, something I’ve rarely found in an amp.

GuitarDaddy Note: This is a Guest Post from Steve Williams, a friend of mine who works for a music shop in the UK. He loves playing and writing about guitars and amplifiers. Thanks Steve!