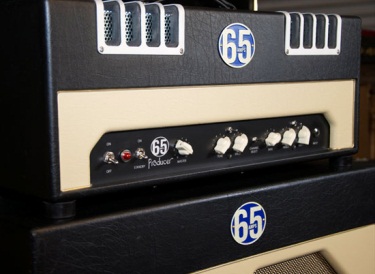 The Producer from 65amps

65amps’ Dan Boul says, “Copying old circuits is becoming more and more dangerous due to the fact that old circuits were designed around tubes that could take high voltage, and modern tubes just can’t.” 65amps has created The Producer as their own, unique solution to coaxing consistent and reliable classic tube warmth from modern tubes.

The Producer runs its pair of EL34s in an extremely safe and unconventional way. With help from Mercury Magnetics, 65amps developed a unique transformer and circuitry that allows EL34s to produce great tone in such a way that they last for an extremely long time – we’re talking decades. Aside from eliminating costly re-tubing, this new approach simply delivers both an outstanding classic distortion, and a fantastic clean tone.

Many players find EL34 amps too loud for their liking, and are forced to use attenuators or master volumes to compensate. The 28-Watt Producer takes advantage of 65amps’ proprietary Master Voltage circuit to deliver tone-rich distortions and cleans at reasonable volumes.

The Producer has two channels, each with an independent 65amps Bump control, which allows for four distinct voices – all accessible through a standard 2-button foot-switch. With 65amps legendary build quality and style, the Producer solidly delivers versatile, luscious tone.

About 65amps:
65amps was conceived in 2004 when partners Dan Boul and guitarist Peter Stroud created a custom amp for Peter to use on stage with Sheryl Crow. Today 65amps’ range of guitar and bass amplifiers delivers surprising power at low volume, amazingly versatile tone and meticulous, road-worthy craftsmanship. You’ll find 65amps on stage and in the studio with a wide variety of players including Richie Sambora, Bruce Springsteen, Keith Urban, Sheryl Crow, Peter Frampton, Bob Dylan, and many more.

Find out more at www.65amps.com